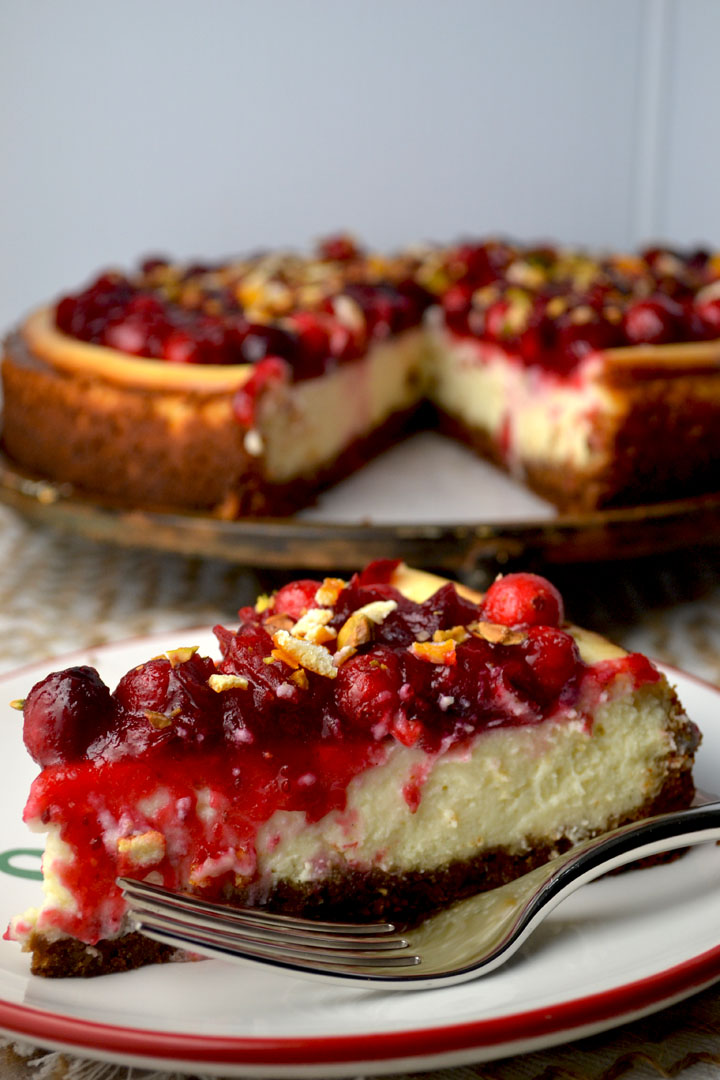 One of the first foods I ever touted myself as being an expert on is cheesecakes.   Before I ever began blogging, I was sort of known for my cheesecake.  That's particularly funny considering when I look back on my recipe archives here, there's nary a recipe for a cheesecake anything!

You see, when my husband and I were dating {the first time}  I made him one of my signature cheesecakes.  I made him a cheesecake and I left the pan with the cheesecake in it at his house.  That doesn't sound like that big of a deal except that he decided to get back together with his crazy ex-girlfriend before he returned the pan to me.  [A little sidenote: we worked in the same office at the time and saw each other every day which was completely and totally uncomfortable].

One day I asked him if I could please have my cheesecake pan back.  "What cheesecake pan?" he responded {as if he forgot that I made him the most delicious cheesecake of his life}.  The next day he brought a brand-spankin'-new cheesecake pan (still in the wrapper) into the office and handed it to me.  "Great, thanks", I said "but where is MY cheesecake pan?"  He didn't know.

Fast forward three years, Hubs broke up with Crazy and we were back together....getting ready to move in together.... and I'm helping him empty out some cabinets in his bedroom above his closet.... and there at the very back corner of the cabinet is MY OLD CHEESECAKE PAN!!   He HID it from his ex because he didn't want her to know that somebody else had made him a cheesecake!  And apparently FORGOT about it!!!    The good news is I got the guy and I got the cheesecake pan back {finally} but I haven't made Hubs a cheesecake since.... until now.

This is pretty much my basic recipe but I'm completely transforming this cheesecake into a holiday version by adding a gingersnap crust, a gorgeous cranberry topping and a sprinkling of fresh made candied orange peel and toasted pistachios.

Not only is this cheesecake divine, it would be an absolute showstopper at any holiday celebration.

***Many folks suggest cooking your cheesecake in a water bath so that the top does not crack during/after cooking.  My friends, I am completely and totally incapable of wrapping a springform pan with aluminum foil in order to keep the water from seeping in.  [I cannot coil garden hoses and I cannot properly wrap a springform pan with foil, neither of which task am I slightly movivated to master].  That being said, I would MUCH rather have a small crack or two on the top of my cheesecake as opposed to a mushy water-soaked crust.  You can hide cracks with toppings; you can only hide a water-soaked crust by throwing the whole thing in the garbage and starting over!  [Yes, that's happened to me.  More than once.]   Take my advice and  skip the water bath.***

Preheat oven to Convection Bake setting at 350 degrees.  Bake at 350 if your oven does not have that feature.

Place the gingersnap cookies in the food processor fitted with the blade attachment.  Pulse until cookies become a coarse crumb.

Stir in salt and butter until well incorporated.  Press the crumb mixture into the bottom of a springform pan and work it up the sides as far as you can without it crumbling down. 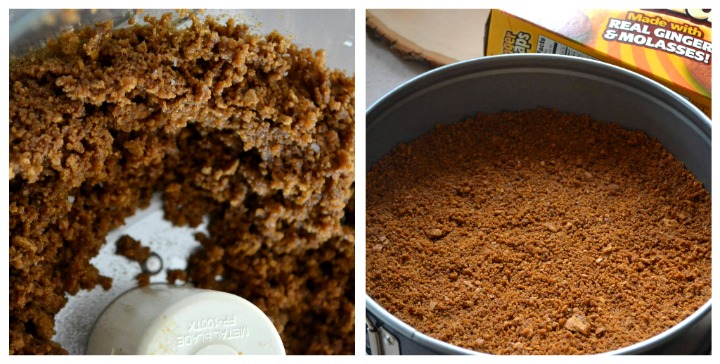 Place pan in the freezer for 20-30 minutes and begin preparing the filling.

Rinse out the food processor bowl and dry completely.  Add the three packages of cream cheese and blend until creamy.   Next add the eggs, blending again until completely incorporated.  Add in the sugar, blend again.  Next add in the vanilla, flour, orange zest and sour cream.  Blend until creamy, but do not overmix.  Pour filling into the frozen gingersnap crust. 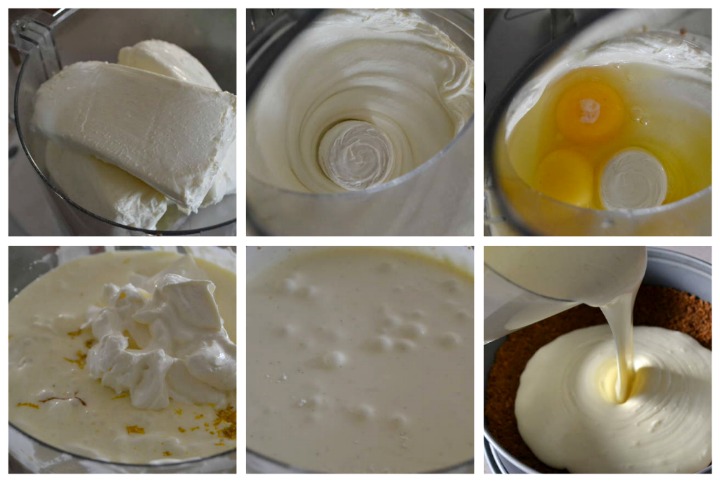 Bake cheesecake for 50-55 minutes, until top is firm with a slight jiggle in the center.  You may need to place a piece of aluminum foil over the cheesecake during the last 10-15 minutes of cook time to keep the top from browning too much.

To make the cranberry topping, place 1 cup of water, 1 cup of sugar, 2 cups of fresh cranberries and 1 tablespoon of corn syrup in a saucepan.  Bring to a boil and reduce heat to medium-low, stirring occasionally for about 10 minutes.  Remove from heat and transfer to a food processor {or use an immersion blender} to break down the mixture.   Strain the mixture into a bowl and fold in the remaining cup of fresh cranberries.  Set aside {or chill} until ready to top the cheesecake.

When done cooking, remove cheesecake from the oven and allow to rest for about an hour at room temperature, then transfer to a refrigerator for at least 4 hours before serving. 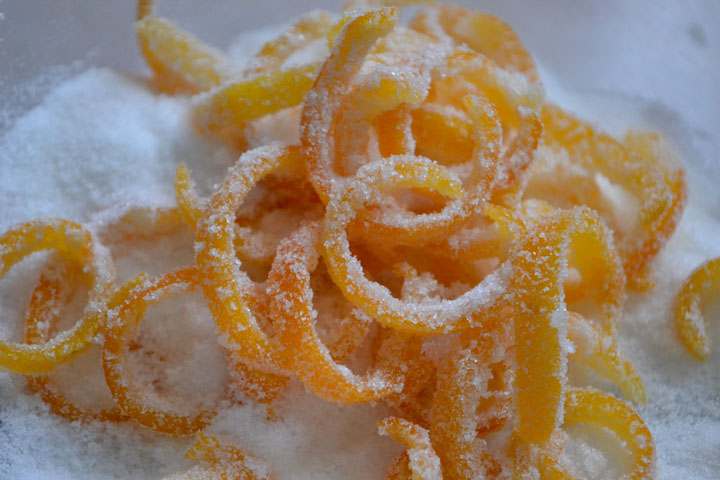 Wash orange and dry well.  Peel off the rind of the orange as shown in long strips {or remove hard outer skin of orange completely and slice into 1/4" strips/pieces}.

Bring a small saucepan of water to boil and add in orange rind.  Cook for about 15 minutes and then drain. 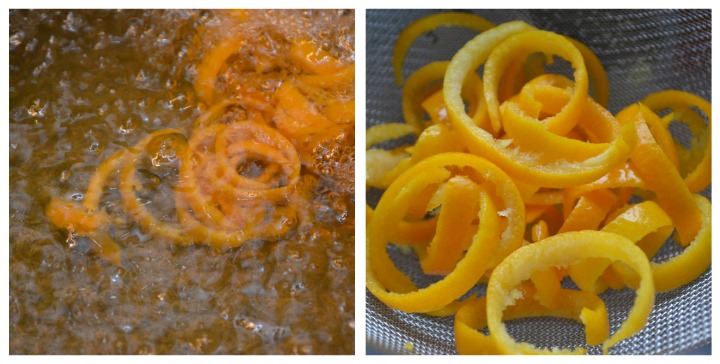 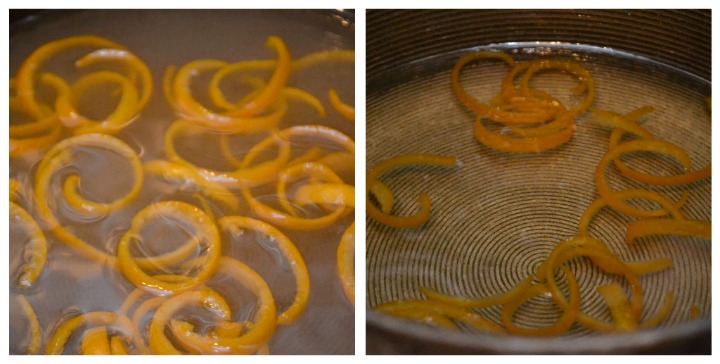 Cook over medium heat until sugar is dissolved and then add orange rind.  Reduce heat to low and simmer for about 45 minutes. 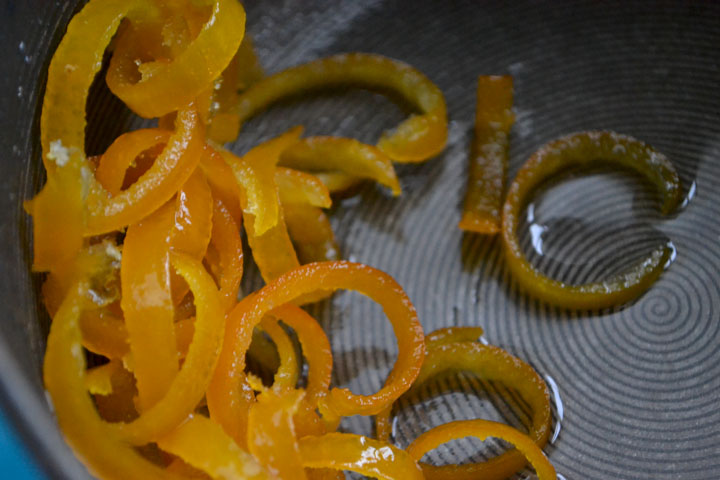 Remove from heat and drain again.

Place remaining sugar in a medium bowl and toss the orange rind to coat.

Place candied orange slices onto a large baking sheet and allow to dry out and crystallize {this can take a few hours}.

One thought on “Cranberry Orange Cheesecake with Gingersnap Crust”