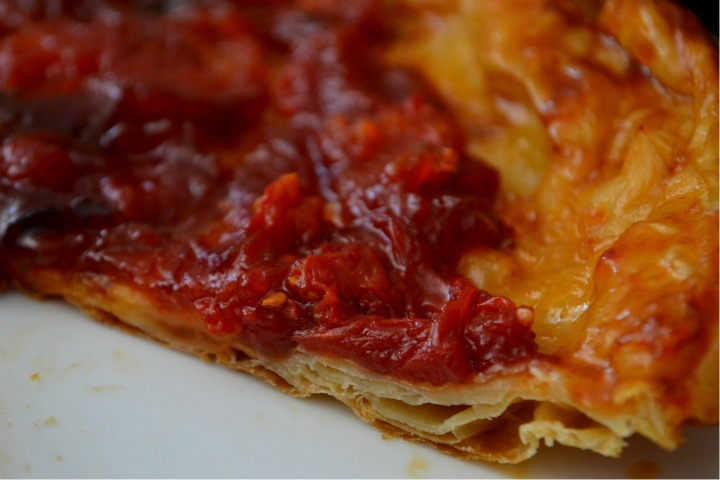 When my dearest friend told me she made dessert for our other friends birthday dinner, which we happened to be enjoying at Mario Batali's Mozza, I was like "Okay, sounds great."  I mean, that sort of meant I'd have to forgo the amazingly insane butterscotch budino, but whatever, what Heather makes is good. Period.  Then she said it was a tomato tarte.

Um, hmmmmmmm.   Would I really have to forfeit the budino for a dessert made out of tomatoes?  Gosh, that was a tough one.  Then the cantankerous maitre d' informed us that no desserts that were homemade would be allowed in the restaurant.   So that was okay.  We'd have to enjoy the tomato tarte at home after dinner, and in the meantime could ALSO have a budino!   Two desserts=win win as far as I'm concerned.

We had a lovely time celebrating our beautiful friends birthday; the dinner was awesome, the budino was awesome and when we got home the tomato tart was the MOST awesome thing of the night.  Strange at first, yes, sort of.  Confusing a bit, very.  But once we got to our second bites, we could not stop.   Not even to discuss the intense, deep flavors the tomatoes carried after being slowly caramelized in butter and sugar.... and the very best part was the vanilla scent that carried through each and every bite.

You think I'm crazy, I know you do.  As I sit here typing, I think I sound crazy trying to sell tomatoes in a dessert.  But really, you must trust me on this one, after all tomatoes are a fruit, are they not?  The only other credibility I have going for me is that this recipe was featured in Bon Appetit.  There.  Believe me now?  Make this and take your tastebuds to a world they've never been before.

Preheat oven to 425 degrees on Convection Bake setting {bake at 425 if your oven does not have that feature}.   Lay puff pastry sheet out on a floured surface to thaw.

Bring a large pot of water to boil on the stove top.  Make an ice bath by filling a large bowl with ice water and set aside.  Begin by cutting an "x" shape into the bottom of each tomato.  Place tomatoes into boiling water for 30 seconds.  Remove from boiling water and transfer to ice bath.

Once the tomatoes have cooled, gently peel the skins off and discard. Slice tomatoes in half lengthwise and remove the core and seeds.

Place a large cast-iron skillet {about 10 inches in diameter} on the stove top and gently melt the butter, distributing it evenly all over the bottom of the pan.  Turn off heat and sprinkle the sugar evenly over the butter.  Place tomato halves cut sides up in the skillet, spacing evenly.

Turn heat on to medium high and cook tomatoes for about 20-25 minutes, until the sugar syrup begins to turn a golden amber color.  Keep an eye on the tomatoes and move them just slightly to keep them from burning or sticking to the skillet.  While tomatoes are cooking, roll out pastry sheet into a 10-inch round, cutting off any corners if necessary.

When tomatoes are ready, remove from heat and drizzle vanilla over the top.  Carefully place the puff pastry over the tomatoes, folding the edges under the tomatoes if possible.  Cut 3 or 4 slits into the top of the pastry and place in the oven for about 22-24 minutes.

When crust is golden brown, remove from oven and allow to cool in the pan for about 8-10 minutes.  Place a serving platter over the top of the tart and carefully flip the skillet over to release the tart.  Several of my tomatoes were stuck to the skillet and had to be individually removed and transferred back onto the tart, but it didn't seem to affect the gorgeous caramelly aesthetic of the tart.

While the tart is cooling, prepare the whipped cream topping by beating the cream with a hand mixer for about 5-6 minutes until soft peaks form.  Add in the confectioners sugar and mix for another minute or so.

Serve tomato tart in wedges accompanied by a dollop of fresh whipped cream and a sprig of mint or basil if you've got it.  If you don't--who cares?  Just dive right in!   After your second slice, you simply must come back and let me know what you think. 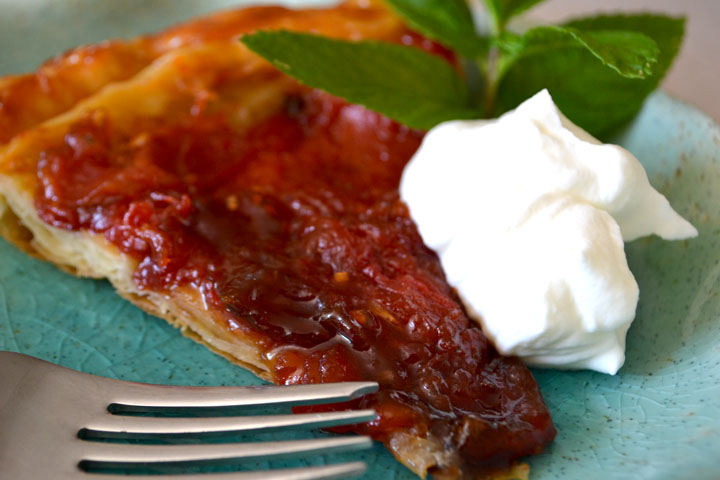