My CSA program has a "trade-in box" for folks who might have something in their produce basket that they don't care for.  You can put something in and take something out that someone else may not have wanted.  I've been trading in my turnips religiously for the last year and half.  I got caught the other day by an old friend that scolded me for turning in the turnips.  "They are so gooooood" she assured me.  Um, let me think about it.....NO.  NO, THANK YOU.  I didn't like turnips.  She rattled off several cooking preparations that I should try.  I still didn't want them, but I sure as heck didn't want to bring them home and then let them go to waste.  My friend simply wouldn't let it go and I quickly realized that she wasn't going to let me leave without taking my turnips home with me.  Alas, I grabbed them back out of the trade-in box {quietly pouting because I really wanted those extra apples to juice this week} and headed home.

I let those unattractive turnips sit for four days....staring at me every time I opened the refrigerator just waiting for me to finally give in and do something with them.  I remembered my friend saying something about cutting them up and cooking them in a skillet with some garlic and the greens from the stems, so last night I finally got to work on them for a side dish for grilled fish.

You probably know what's coming next...... dum dum da dum.....  they were awesome.  She was right.  I still kind of can't believe it.   They were slightly sweet, super tender, almost buttery and flavored with a little bit of garlic, simply fantastic.  Not only will I never trade them in again, the next time I see someone else trying to trade in their turnips I will fight them {until they break} on it too.   I'm not sure why I've shunned them for so long....my only guess is that they just look to akin to the radish....which will always have a place in the trade-in basket as far as I'm concerned.

Peel the turnips.  Cut the leaves off of the stems and set aside.  Remove the stems from the turnips and discard.  Chop turnips into bite size chunks.

In a large skillet over medium-high heat, add olive oil.

Once oil is hot, toss in turnip chunks and allow to cook, stirring occasionally for about 4-5 minutes.  Once turnips begin to carmelize, add in minced garlic and turnip leaves, continue to stir often for another 2 minutes.  When greens are wilted and garlic is just beginning to turn golden in color, remove from heat.  Stir in crushed red pepper and season with salt and pepper. 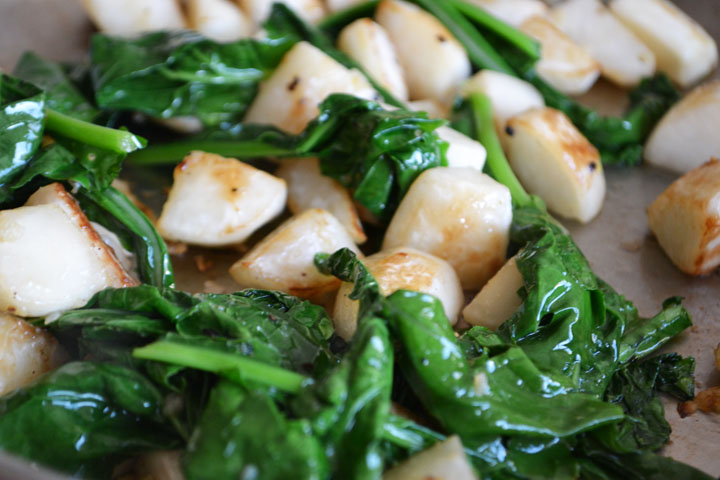