Just as I texted a photo of this lovely little dessert to my darling friend down the street and told her I was coming bearing sweet gifts (there is absolutely no reason a dessert like this should stay in my house with only me to eat it..remember the carbohydrate ban my husband's on?) she sent me a text right back with a picture of an insane seven layer bar she'd just made for me.  What?  You don't have a friend like that?  Guess you better get one....I actually have two, not to brag or anything.    I had a big problem on my hand's though--which do I eat first?   So I decided to have a piece of both....totally neglecting the fact that my 15 year high school reunion is in two weeks.   And they were both so good that I'd do it again... absolutely worth the extra 2 hours I'll be spending in the gym this week!! 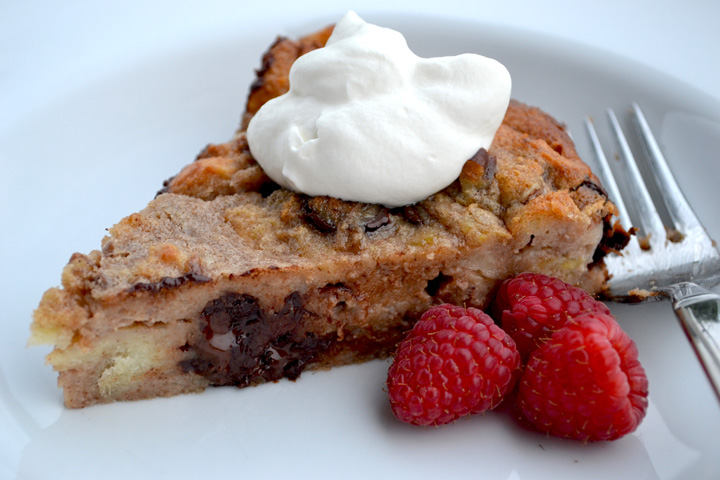 In a large bowl, whisk eggs, cream, milk, sugar and vanilla until well-incorporated.  Pour in bread cubes and toss well to coat.  Place in the refrigerator for about 30 minutes, turning once about midway through.  You want the liquid to be absorbed by the bread.

Preheat oven to 350 degrees.  In a medium skillet set over medium heat, melt butter and add brown sugar and cinnamon.  Stir until mixture begins to boil.  Add bananas and stir for about one minute; remove from heat.

When all liquid is absorbed by the bread, add bananas, chocolate and pecans and stir until combined.

Butter casserole dish of your choice and add bread mixture.  Bake at 350 (on Convection Bake if your oven has that feature)  for about 40-45 minutes until bread pudding is golden brown and has puffed up to about double in size.  Pudding will fall when you remove it from the oven, this is normal.  Serve with whipped cream, ice cream, caramel sauce...whatever your heart desires.